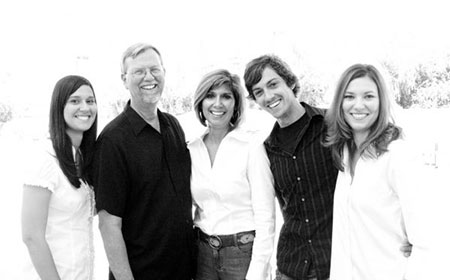 My name is Pete Mallinger, and I have been the Pastor of Calvary Chapel El Centro since we began the fellowship in 1977.

After getting out of the service in 1972, I was searching to find myself, and like many, I tried all kinds of things to bring me peace. Nothing brought any fulfillment to my life until one Monday night on May 12th, 1975. I found myself in a Church in San Diego, and that night changed me forever. The previous week I had gone to a church that Mike MacIntosh (pastor of Horizon Christian Fellowship, as it is called today, part of the Calvary Chapel movement) was sharing out of the Word of God in, and it touched me like nothing else has ever done.

When the invitation was given I didn’t respond by going down because the girl who had invited me was praying, "Lord have Pete go down", which was a prayer I thought that all the people in church could hear. As I look back, that prayer was only a whisper and it was my pride that kept me from going down. That following week I wrestled as to who God was, and realized that it was Jesus Christ the Son of God who did die for me. I looked forward to that next Monday night so I could give my life to Christ. As the Word was taught, it did not grab me as the week before did and the music also did not touch me either, so I just sat there wondering what to do. That is the first time I heard the still, small voice of God speak to me. It sounded just like me, but I know it was not. I heard this, "Are you going to depend on your feelings or the truth?". I got out of my seat, went forward, and my life has been changed ever since.

I went to church as much as I could, and found myself getting involved in the ministry. I helped as an usher, and in a short time I was helping with counseling people who had accepted the Lord on Monday nights, began teaching a home study, teaching every other Sunday morning at a Convalescent Hospital in El Cajon, and was asked a little later to pick up a Bible study in a city called El Centro. I came up with every reason why I should not go down the 120 miles on a Friday night to do that… until I felt I would be in disobedience to the Lord if I did not go. I agreed to go down for one time. That was in June of 1976. Since the few people who were there were so blessed that someone would come down and teach the Word, I agreed to come back the next week. As time went by, the study began to grow, and they began wanting a Sunday morning church service. After much prayer, I felt the Lord wanting me to do it, so on the first Sunday of January of 1977 we started our church.

I have been so blessed to be able to be the pastor of this wonderful group of people and to meet my soul-mate Marci. We were married on November 26, 1977 and have been blessed with three wonderful children. They are full grow and out on their own, so we are empty nesters… and are truly enjoying it.

One thing you might be interested in is that I have something called dyslexia. Growing up it always haunted me. I remember being in school and reading out loud and coming to the word “was” and I would say “saw” and the other kids would laugh at me. I would come to the word “God” and say “dog” and the nuns would beat me and lock me in a broom closet. They would call my parents and say I was retarded and should be put away. Because of this I always tried to hide my dyslexia, but the Lord showed me a better way. He wanted me to show people that someone can be victorious in any difficulty you might have.

The Lord directed me back to school (while still being a pastor, principle of our Christian school, a dad and a husband) and get a Masters Degree. Wanting to be obedient, I did what was needed to be accepted into the Masters program at Azusa Pacific University. In May of 1991 I received a Masters of Arts, and in May of 1992 I earned a Masters of Divinity. I am so blessed that the Lord had me do this, not to be able to boast about having these degrees, but over the years I have been able to share with people who think they are a failure and that there is not hope for them in life. I used to feel the same way.

But I can now share that, in Christ, they can do whatever the Lord puts in front of them. It may take them a little longer to read, but they can be successful if they do it unto the Lord, and are willing to give the extra effort which others may not have to give. Next to seeing people come to the saving knowledge of Christ, this brings me great joy. If I can help any of your kids, or you as an adult, please know I would love to do it, I am here for you.

Thanks for stopping by, and I hope that we get to meet some day soon.

Blessings From Above,
Pete Mallinger

Check them out here